Banner Saga in the OSR 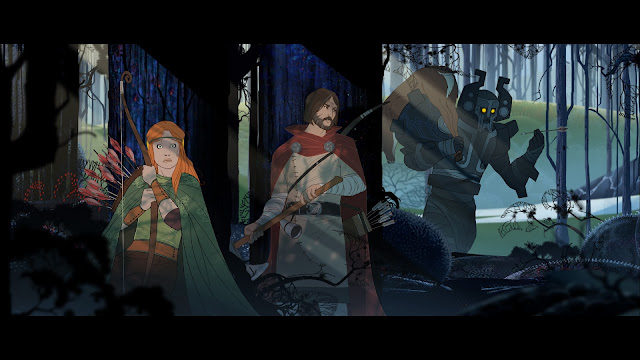 The Banner Saga is one of the most solidly-OSR video games out there, so in honor of its recent conclusion, here's all you might need to run it.

Men and women who show aptitude in pulling upon the threads of creation are taken in by the order of Menders and sent out across the world to build and heal.

HD and Saves: As cleric
Weapons and Armor: Light armor and simple weapons

The highest and most powerful of the menders are the valka, who sit in council at Manaharr and watch the world unfold around them. Men of their number often go mad from minds over-driven.

HD: As cleric
Saves: As magic-user

Wielders of Power: Men or varl who would willingly and openly cross a valka are tremendously driven or immensely stupid. Wielders of political power are inclined to dislike your interference, and undermine accordingly.

Loom-Mother's Gift: The valka are masters at pulling upon the threads that weave together creation. They may use their powers [level] times per day safely, as per VAM rules. Beyond this limit, they mus Save vs Magic or risk unraveling (roll on your favorite spell backfire table)

Valka begin with two powers on the following list, randomly rolled. Each time they level up, they may gain another (re-roll duplicates)

Horned giants created by the god Hadrborg; now a dying race, as no more will ever be made.

HD and Saves: As dwarf

Weapons and Armor:
Of Our Bones, the Hills: Varl add + 1 to their STR and CON modifiers.

Shoulders Most Broad: Varl may carry twice as much equipment before becoming encumbered. They may carry 2 Sacks during long-distance travel.

It's the Beard: Varl are all male, cannot reproduce, and show no interest in related fields.

Fear of Fire: A successful WIS save is required to come close to or interact with fire. Otherwise, varl will avoid it as a priority.

Half-man-half-horse beings from the southern plains of Dalalond. Their relationship with the northerners is strained, for the horseborn are responsible for the killing of all horses in the world. (Use Welsh for their names)

HD and Saves: as fighter

Weapons and Armor:
Freedom of Movement: Horseborn move and carry as ponies, being smaller than normal horses. They have no love for cities, buildings, and walls. Underground is right out.

Like a Kick in the Head: Horseborn may make a 1d8 melee attack to an adjacent enemy. On a hit, the target must make a successful Save vs Paralysis or be stunned for 1d3 turns.

Pins and Poisons: Horseborn may 1) tip their spears in poison (1d4 damage for 3 turns, does not stack) or 2) pin an enemy in position with a crippling shot (enemy reduced to 5 movement)

Created by a bitter and nameless god to wage war against the rest, the dredge are the silent hordes that come up from beneath the earth and down from the north wastes of Valkajokull.

HD and Saves: as fighter
Weapons and Armor:  See below. To-hit as fighter.

Stone Speech: Dredge speech is akin to the tones of a tuning fork. Menders may learn to understand their language, and may speak it with the aid of an appropriately-tuned staff. Dredge can understand the language of men and varl, but cannot speak it.

The Great Enemy: Men and varl (especially the latter) view you as an enemy. Hostility is guaranteed, violence likely.

Special Equipment:
Template: Choose one of the following archetypes.


The gods are dead, their powers have faded from the world. There was never an organized religion, and now few people hold onto any of the old traditions at all.

Each god has a god-stone somewhere in the world, engraved with their likeness. They are notable landmarks, and gathering places for the few remaining faithful.

Luka Rejec's Ultraviolet Grasslands covers everything one would need to run the travel portions of the Saga. Simply replace the points of interest with locations from the game (or suitable equivalents) and play with the final goal being reaching Arberrang (or, for UVG, The Black City). Besides that, the following points should be helpful.