Everyone and their cousin has their personal take on clerics (I really, really like Beloch Shrike's anti-magic cleric, myself) so I might as well too.

Bless: With a prayer and a laying on of hands, you may do the following:
Turn: Priests may turn away unholy beings as in LotFP. Roll 2d6 and compare to the graph below. 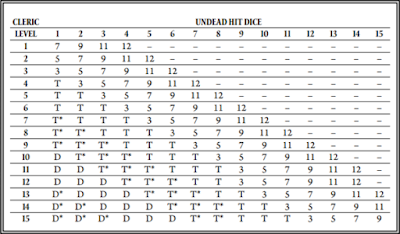 Upon failure, the priest cannot Turn for the remainder of the day.

Turning works against whatever is considered unholy by the priest's religion. By default, this includes demons, malicious spirits, and desecrated undead.

Relics: Priests may use relics appropriate to their religion

Holy Orders: Choose one of the following.