Picking up where we left off...

The battle of Yetek works like the opening sequence of Deep Carbon Observatory - everything is happening at once, you never get a chance to catch your breath. Pick one of the three entries into the city: you will be able to see anything that the arrows are pointing to. Your goal is the temple in the center.

There is a twist here: The God of Ankhar is also active and will move around the city. Every time the PCs move between events, roll d6.
If there are multiple routes it can take, a d6 roll divided by two or three as applicable will direct where the mad one goes.

What if I Don't Want Hyperlethality? 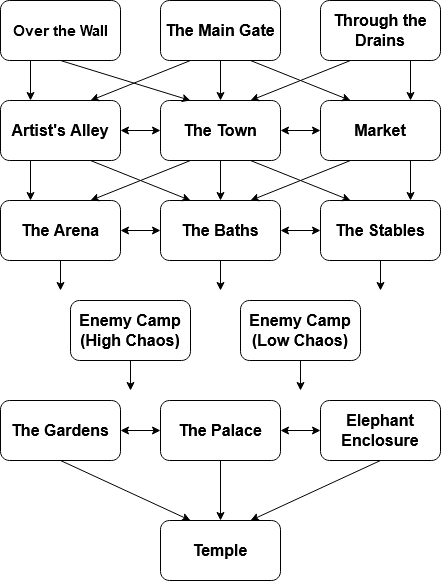 Who needs a ram when you have Ayo?

People running in chaos, soldiers fighting in the streets.

Still filled with the impaled bodies of those deemed to have been working idolatrous crafts.

Looted and smashed to bits.

An old, sturdy complex of buildings where folk would purify themselves before heading to the Temple.

The stench of camel dung and the terrible sounds of animals in terror fill the air.

Where once there were chariot races and theater services, Malenairis transformed it into a place of bloodshed.

Malenairis' lieutenants have managed to establish order among the main body of soldiers.

The soldiers of Ankhar fight amongst themselves now, leaderless and in a panic. This is the default state of the Camp.

Once home to the queen and her consorts, then home to Malenairis and his lieutenants, now ablaze.

A moment of quiet, but not for long. The fire of the palace casts dancing shadows among the date trees and palms.

A makeshift wooden palisade set up in the gardens abutting the palace.

The statues have been toppled, the frescoes scratched out by spearpoint, the mosaics torn up with shovels. The desecration is total, gleefully done. In the center of the wreckage a pavilion has been erected,a tent of shimmering indigo cloth whose dimensions are so perfectly measured that it hurts to look at it: the angles are too sharp. An altar has been erected in front of the tent; blood from the sacrifice of sheep and bulls already stains the scarred image of the Mother of Dawn on the floor.

A naked manlike figure, twelve feet tall with golden skin and fiery beard. He has been mutilated by his worshipers: eyes cut out, ears cut off, feet hobbled. Screams and babbles incoherently. Masturbates furiously.

A bloated black goat just a bit smaller than the elephant. It has grown fat on Ankhar's sin, taking on all of their crimes against humanity into itself so they might absolve themselves of guilt.

The Azazel will not try to fight: it will permit itself to be killed. This will curse the party with the Mark of the Goat - they will not be welcomed in any city this side of the Indus if they bear that mark.

(MAKE SURE THE CURSE IS CLEARLY COMMUNICATED. PCs will have bad vibes about killing it - too easy, walking into a trap, whatever. Don't use it as a gotcha.)

Useful notes
If the God has not been dealt with, it will interfere if there is an attempt to move the Azazel from its tent.

Email ThisBlogThis!Share to TwitterShare to FacebookShare to Pinterest
Labels: adventure, BY A WOMAN'S HAND, Knave, minimodules