Lands of the Mare Interregnum Part 2: The World At Large

The World at Large 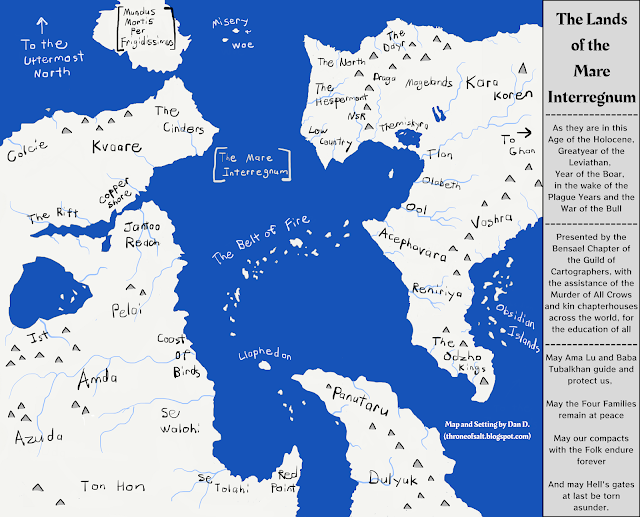 Part 1 of this duology can be found here.

A few notes, which also apply to Part 1.

The typical political structure is a confederation of city-states. Large centralized nation-states are liable to angering the Folk or worse, and so do not tend to form or last particularly long after they do.

"King" and "Prince" are not necessarily male titles.

The Tiger's Spine doesn't match between the maps - this one is more correct, but the other one looks bad if it's accurate.

The overall design of the Mare started with old Roman maps of the Mediterranean, the ones with east oriented at the top. This particular map started with me editing the shorelines of the Arctic Circle

The Uttermost North - Iceflows and cold. Endless days and endless nights. The Wendish claim that their ancestral homelands of Atri-Tun might be found in the Uttermost North, though no one who has gone that far and returned has ever reported such a place. It is the realm of Orca, of Mundo, of the Auroral Staircase and the hidden hotspring islands of the valkyries.

M.M.P.F - An inhospitable lump of barren stone and glaciers. The wind hates you and wants to eat your bones. No one lives here by choice. The Folk here recognize no compact with humanity.

Misery & Woe - Barely-habitable islands used by Kvaare as a prison in the wake of the Golden Revolution. A few decades of direct management gave way to simply shipping and dumping prisoners there

Most of this is already in the first post! Go read that.

Ghan - A hilly, arid land east of Kara Koren. True desert. Difficult to navigate. Ancient irrigation canals lined with fields of coffee and barley make a grid of the rivers. Clay brick towers offer sky funerals to the vultures. Shrines to the Bull that Carries the Sky rise at crossroads.

Vashra - Provenance and inhabitants to be determined.

The Odzho Kings - Three city-states with thick walls and high towers, built long out of memory. "Odzho" in the local dialect is the name for the kingfisher bird (the kings are named so for the brillian colors of their traditional robes), so they are often called the Fisher Kings by outsiders. Funerary cannibalism.

The Obsidian Islands - Volcanic islands famed for pyromanciers and gigantic domesticated crabs. At their very easternmost curve are the Trailwards, with little Pa'O Pa'O at the very end: the furthest settled land in the world.

The Belt of Fire - Volcanic tropical archipelago that provides the safest passage across the Mare. Home to many migratory maritime lilifio nations. Windcalling shanties, painted sails, caravan-catamarans. The capital, Bzenzilesh, is located on the large island below the F-I.

The Cinders - A desolate, sterile nothing. Dust and ashes and bare stone. Leftover arcane fallout has rendered it ontologically inimical to life of any kind, even down to bacteria. Wizards will occasionally attempt to mount expeditions into the interior, believing that their lead-lined suits and layers of glyphs will help them (they will not). Those wizards tend to melt from the inside out within a few days, after only a few minutes of exposure. Cause unknown: The region has been lifeless for as long as both written and oral histories will attest.

Kvaare - The most industrialized region in the world (sans Dis), pushing that envelope as far as it can be pushed without rousing the true rage of the Folk or falling facefirst into an emergence of Hell. New money (all the aristos were killed in the Golden Revolution)

The Copper Shore - The Second Empire's former colonies in Kvaare, now reclaimed. As all goods coming to Kvaare must pass through the Copper Shore, it is the wealthiest of its provinces.

The Rift - The western continent is pulling itself apart, slowly, slowly. The Rift marks the border between the Kvaarish and Pelaian cultural spheres, claimed by both but truly belonging to neither. Cliffside towns, spearfishing, poverty, rope bridges, tests of manhood, "the bleeding stones", arranged marriages, giant cliff urchins.

Jantoo Reach - Site of the Second Empire's former colonies in Pelai and now its last remnant. Has a certain feeling of going through the motions, performing the functions of Imperial government almost as a cargo cult. Mostly absorbed back into Pelai.

Pelai - Long ago, the line of the god-kings of Pelai was overthrown, and replacing them were the twin councils of wizards, the azdat and the obet. Deep jungle. Red soil. Immense, unique biodiversity.

Sea of Tazir - A freshwater sea whose waters are so clear one can see the floor even at scores of feet deep.  It is also called the Mosaic Sea, for those stretches where the stones on the floor that look to have been set with painted tiles. The colors will change, displaying scenes of sea life, and occasionally the form of a woman in silk robes.

Ist - An isolated principality on the shore of the Sea of Tazir. Only ruins now, swallowed up by the jungles. Its princes were devoured by the Great Manticore in a single night centuries ago, and the beast lives there still.

Coast of Birds - Hundreds of miles of Amdalese coastline dominated by immense stone statues of birds, providence unknown. They are expertly made, ancient, unique, and face the sea with their wings raised to the sky.

Amda - An old, old patchwork of principalities and kingdoms on the plains. Oldest continuous civilization in the world, some say. It is longstanding tradition here that the kings of Amda take no women as their lovers and take heirs only by election, as a means of preventing inheritance squabbles. Ancient monoliths, haruspicy, wandering swordsmen, strict hospitality laws, well-kept roads, zorses and giraffes.

Se Walohi - Vast and sandy desert. Most of its few inhabitants are nomads who stick to the coast between southern Amda and Se Tolahi.

Se Tolahi - A quiet red desert, far removed from the world at large. It is known mostly as home to the only prominent monotheists in the world. This means they are generally viewed with some suspicion by most, though their philosophy is a pacifist one that treats the gods with no particular disfavor.

Ton Hon - A cold, inhospitable land. Its lower reaches are the furthest south that any humans reside permanently.

Red Point - 'Strange as Red Point" as the saying goes, and well deserved. Avoided by most. It is a strange place, up among the desolate, rocky hills. Strange folk, strange doings. The inhabitants are nocturnal, communicating only by rock paintings left out for the morning.

Llaphedon - Island of the mushroom men, where the immortal fungal folk plod silently towards the center through the still and spore-filled night to build a ziggurat of vast black stone. The villages on the coast trade mostly in funeral shrouds and psychotropics.

Panutaru - Provenance and inhabitants to be determined.

Dulyuk - Provenance and inhabitants to be determined.

There are some small landmasses in the great ocean on the other side of the world, but they have been left alone - the few circumnavigators who have stayed there for any amount of time (a small fraction of an already small group) report those lands to be desolate, filled with unfriendly spirits who have no compact with humanity, or both. It's creepy shit.

And there we go, as up to date as I can get with the world of MSF.