TIME IS A FLAT CIRCLE

THE OCEAN IS ON FUCKING FIRE

OBLIVION GIVES NO AWARDS FOR CRUELTY

The selection process is simple. I choose things and my choices are correct.

THE UNBEARABLE MALAISE OF BEING

God what a shit year.

Am I saying this because my good friend Mon is a cast member? Yes. But am I also saying it because this AP is an absolute delight to listen to? Also yes. It's one of two APs I have actually listened to long-term. Among other things (humor, pacing, cast & characters all great), it is a fantastic example of how to run a Blades in the Dark style game (as it uses the mech hack of BitD, Beam Saber). Also Mon does art for it, which is great.

I made my thoughts known some months ago, and nothing has changed. It's fucking rad.

Proving repeatedly to all and sundry that no one is immune to bait, rpg twitter is a death-spiral carousel of the offensive and insipid, drowning out anything of value in a tepid wave of subtweets interrupted by entirely too frequent spikes of harassment. Blogger might be a terrible platform, but you can at least develop an idea on it.

Despite being awarded one third of the Trifecta Grande last year, Troika has been struck from the rolls. Through mechanisms unknown to me, it has accumulated a singularly unpleasant online following to the point where my desire to make things with it, run it, or even really mention it at all have evaporated.

BEST BOOK THAT IS NOT YET IN BOOK FORM

Nothing announced since last years awards has me as excited as this, and since I got a preview copy of Dungeon Bitches that book isn't in the running for this award. It will be well worth it when it arrives.

I AM A PATIENT MAN

THIS BOOK HURT MY EYES

One of the games featured in Itch's recent Palestinian Aid Bundle, and an unfortunate victim of "great idea, lots of care put into it, I respect what it's doing, I can't read it without a headache."

The font used for headings is all caps, narrow, and has next to no kerning. It is often presented as white text on a black box on a white background, and black boxes are used in lieu of bold for emphasis. The central text is squashed by margins expanded to fit large, vertically-aligned chapter names.

It's offputting enough that I went from "this is cool and I am excited" to "this is another game I will never read and never play" more or less instantly. Wish that wasn't the case, but for want of good kerning the war is lost.

WE REGRET TO INFORM YOU THAT LOTFP IS STILL DEAD

I don't even like Mork Borg that much but they A) have a goofy heavy metal aesthetic and B) actually release things C) didn't decide to tie themselves to a sinking ship. So they get an award and we're all better for it.

There are plenty of lightweight sci-fi games out there, but 2400 gets an advantage here because Tocci keeps updating it with additional setting / genre splats. Each is 4 pages long (or a single printer sheet, if you are printing out a spread) and follows the same general pattern - character backgrounds, random inspiration tables, some extras keyed to the setting / genre this particular expansion is for - which by itself isn't much but with 12 of them now included with the core rules and a significant following of fan hacks, there's a whole lot of material to play around with.

A grotty, hyperviolent story about broken people in a fucked up world that is significantly more emotionally deep and honest than a story called "Chainsaw Man" would be expected to be. It's a shonen that decided to wake up and choose violence, both literally and in taking the genre conventions and dismissing them utterly. Our main protagonist Denji is an illiterate teen so in debt to the yakuza thanks to his dead father that he's sold body parts and eaten out of dumpsters and he takes on a government devil-hunting job just for three meals, a bed, and the chance to maybe touch some boobs. Except instead of being gross and creepy like you'd expect it's an expression of his desperation for human connection + awkward teenager stuff. Also helps that even weird semi-feral idiot Denji knows you should only boob touch with permission.

Also the art is excellent, the pace is breakneck, the ending is buck fucking wild, and the world is A+. 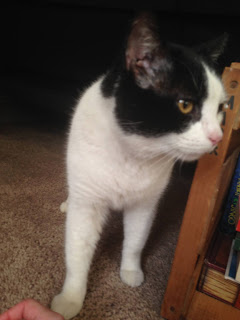 Observe the absolute size of this big cuddly lad. He is missed very much.

MOST DESIRED SUBJECT FOR GAMEPLAY EVOLUTION

The Wretched (Chris Bisette) + Others

Last year, I cited the The Wretched as one of the standout solo games of this new and terrible era, and since then there have been dozens of hacks for it covering a wide variety of interesting topics and scenarios.

And I feel like its spinning its wheels. When I try to play Wretched or one of its descendants, I end up bored by Day 3, because Wretched-based games have a critical issue that I've yet to find dealt with - there's a chronological framework (via the days framework), but prompts themselves are not arranged in any sort of chronology themselves. So you do about ten of them and start getting prompts that, logically for the game you've been playing, you should already have had. Or you get ones that are just repeats of things you've already established. The tension the game aims for evaporates, which is not helped by most common replacement for the Jenga tower - had I not given up on my first run through The Wretched, I would have likely won through raw attrition.

I still like the idea, mind you, but there's room for improvement and no one's cleared the path yet, and that saddens me enough to say something about it.

That's all for this year. Overall, despite the nigh-excessive number of games that have come out since last July, I find myself not particularly drawn to most of them. We sit atop a safe and placid plateau of game design, and I wait vulture-like for the next raw and beating heart to bloom vibrant and vital in the midst of its seas of grass.

Email ThisBlogThis!Share to TwitterShare to FacebookShare to Pinterest
Labels: Salties