Lands of the Mare Interregnum Part 1: The Hespermont 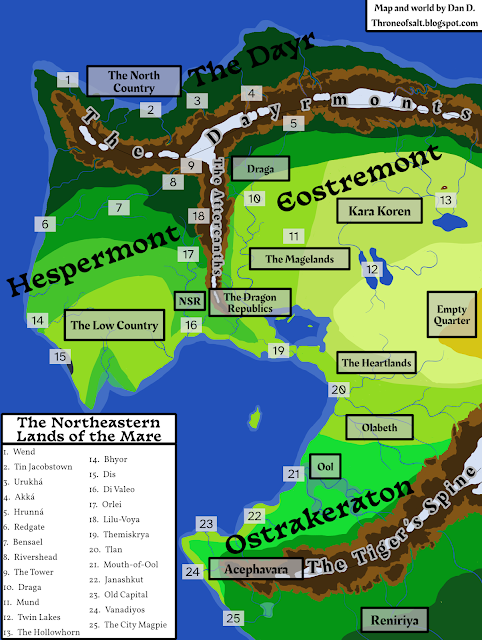 Last year, I did a big picture overview of the world of Mother Stole Fire, but the map and location descriptions only covered a chunk of the eastern continent. I've remade that map.

Apologies in advance for the bits I clearly just copy-pasted, and for the details that weren't.

Also thanks to CosmicOrrery for fixing up my mountains.

All of this is anticanon.

All land north of the Dayrmonts. Territory west of Urukhá is considered to be both Dayr and Hespermontane, and so tends to be called "The North Country" as differentiation.

Wend - An isolationist city-state of gleaming white towers. Its inhabitants have claimed to descend from unknown Atri-Tun in the uttermost north, though no one has ever found such a city.

Tin Jacobstown - Originally a shantytown founded by southern migrants during the Plague Years, now chief of the prospecting and whaling towns in the western Dayr. By offering their bodies and shades in service to Orca after death, the sailors of Tin Jacobstown are granted special dispensation to hunt whales.

Urukhá - One of the Three Sisters of the Dayrdani. Marks the traditional boundary between "The North Country" and the Dayr proper. The mammoth matriarchs have great influence here.

Akká - One of the Three Sisters of the Dayrdani. Sits at the northern end of the Splintered Stair. Home of the Great Forge of Azad.

Hrunná - One of the Three Sisters of the Dayrdani. Sits at the southern end of the Splintered Stair. Culturally distinct from its sister-cities from buruq influence

All land west of the Attercanths. Territory west of Urukhá is considered to be both Dayr and Hespermontane.

Redgate - Entry port to the Mora-Pono. Named so for the twin redwood groves planted either side of the river. Semipermanent dolphin population in the harbor.

Bensael - A city rebuilt by veterans, survivors and refugees of the War of the Bull on top of an obliterated provincial capital. Its location on both east-west and north-south travel routes means that all peoples of the Hespermont (and beyond) will arrive there eventually. At its center is the Old City, Tanniclen - an enclave of wizards and old nobility

Rivershead - Somewhat isolated by its position far up the Mora, its closeness to the Tower and old roads towards Orlei have nonetheless kept it. Significant cultural overlap with the forest peoples, particularly the Wudu-Wasa and the Laurel Hauflin.

The Tower - An enormous prehistoric structure, big as a mountain itself, surrounded by a ruined city of the idaltu.

Lilu-Voya - Largest of the lilu's surface settlements, conveniently located by way of earthquake and luck right in the middle of one of the major passes of the Attercanths. Centerpoint of the lilu diaspora and republican movement.

The Low Country - Very broad term, typically used for "anywhere south of where you are". Properly, the land between the Arivienne and Mora-Pono watersheds. Devastated by the War, and much of it has not recovered since. The customs here are strange, and inexplicable things haunt the backwoods.

Bhyor - "In Bhyor there is the House of Sin" goes the story. A vast iron cube nestled in the branches of the gargantuan petrified tree that sits atop the sharp stone outcropping in the bay. Low whitewashed houses with blue mosaic facades and empty doors. The House had been part of a tradition, where those guilty of heinous crimes would willingly choose to enter and never return, to clean the guilt of the many. Everyone knows now of how the sacrifices grew more and more frequent, until one warm night in late summer the entire population got up from their beds, walked along that narrow bridge, up the thin stone steps, and stepped through the black mouth of the House. No one goes to Bhyor anymore.

Dis - Once the Imperial colony of Coreolana, now Hell itself. A demon-haunted hill of rust and blood and suffering behind cannon-scarred iron walls. Long claws burrow into the poisoned earth, smoke-wreathed towers  belch filth into the sky. Deep at its center, the Furnace Throne is fed a stream of sacrifices. Beyond the walls, miles of blackened fields - craters, trenches, rust-hollowed war machines.

The NSR - The Necromantic Socialist Republic was born out of the trauma of the Plague Years and the War of the Bull as an experiment in utopia. If the dead so outnumber the living, and the dead have no use for their bones, let those bones be put to the service of the living.

Di Valeo - Core of the NSR, rebuilt by the hands of the undead after its complete destruction during the war. The city is beautiful, if perhaps a bit macabe, and there is a melancholy that cannot be shaken even with the good humor of its inhabitants. There is a great cathedral here, dedicated to Ama Adimatha in her aspect of the Lady of Sorrows and the Stillborn.

The lands east of the Attercanths, south of the Dayrmonts, and north of the Heartlands.

Draga - The old northern capital of the Second Empire. Still claims Imperial lineage (through the descendants of an exiled bastard), but this is a figurehead and everyone knows it - power resides technically with the Inner Council, and practically with the Solar Church. An austere, grey, often puritanical and rather joyless place. Butts heads often with Bensael.

The Magelands - Magic flows on the breeze, heavy and sweet as honey. suffusing every breath and cell and thought. The grass is greener here, the sky is bluer. Stones are no longer bound by the shackle of gravity, trees pull up their roots. Form and purpose lose their concrete boundaries, time and space unspool their tangled knots. It is intoxicating. It will bind you to itself until you are so filled with the freedom it offers that you are wiped clean of yourself and made a part of it.

Mund - Crumbling city-arcology; a grey wall of grey stone holding back the spread of the chaotic Magelands. A fortress city in the midst of the Magelands. A brutalist arcology packed tight with tens of thousands of people who attempt to resist the power of the Magelands through the mindless repetition of enforced hivelike normalcy. Total denial of the life beyond the walls. Sterile. Eternal.

The Dragon Republics - Fourteen city-states built atop what is, as best as archaeologists can tell, the kernel that first formed Darvatius' empire. An economic powerhouse thanks to their elaborate system of guilds and banks. While on paper the Republics still follow the old Imperial Church, sects of dragon-worship are an open secret among them - even their longtime ally Draga gives them arm's length when the political situation is inflamed (and it often is). There are some who believe that the next emergence of Dis will be here.

Themiskrya - Capital city of the amazons, situated where the mouth of the Thermodon meets the gates of the Blackwine. Triremes with horsehead prows ply the waters of the Blackwine. Cavalry patrols ride up and down the roads to Kara Koren. Children play in the agora under the bronze eyes of the colossal statue of Tabiti Hipparctrix Hodegetria. Old women still tell the story of how the statue stepped off its pedestal, spear in hand, and waded out into the harbor to fight off the Coreolanic navy during the Plague Years.

Kara Koren - Wide open plains stretching off into the horizon. The Buruq make their home here, their semi-nomadic bands cycling between the small cities on the rivers and lakes and the open prairie. Vast herds of bison, antelope, camels, horses and wild boar can be found here, as well to the bulk of the eastern continent's elephant population.

Twin Lakes - Largest of the permanent settlements of the Buruq and the last city to be found before the long, desolate road to Ghan. It has expanded out from the isthmus onto an archipelago of artificial islands in both lakes.

The Hollowhorn - Sacred mountain of the Buruq, rising alone above the grasslands. Named so for the magnificent cave systems and ancient lava tubes within it. Climbing the slopes or entering the caves is limited only to priests and those granted special dispensation, and access to the summit is barred to even the elders. Deep within its chambers sleeps the Last King, the only true dragon to survive the extinction.

The Southern Horn, stretching from Olabeth and Dead Quarter to northern Reniriya.

The Poison Coast - The land between the Heartlands and Ool.

The Heartlands - As the Second Empire collapsed, the aristocracy made a mad dash to secure their holdings in the east. While some of the governors and generals were able to maintain a sense of order and continuity, disease and famine swiftly ended their attempts. Centuries later, the Heartland is a feral wilderness filled with squabbling warlords and the ruins they inhabit.

Olabeth - The heart of the Second Empire has been reduced to a decaying, sickness-stricken land. The Plague is still here, seeped deep into the soil and water. Impenetrable swamps and dark forest filled with misshapen, monstrous creatures render crossing the territory by land near impossible. There are still human inhabitants, but they have been changed so completely and severed so utterly from the rest of the world that they are left to their own devices.

Tlan - Capital of the Second Empire. A metropolis reclaimed by nature. Some folks will talk of treasure that remains hidden there, but nearly all was looted during the collapse and any that remains is hardly worth the danger of an expedition to the Poison Coast. From the harbor, one can still see the gleaming golden dome of the solar tabernaculum where the sacrifices were held.

Ool - Mangrove swamps and mudflats choked with the thousand-thousand varieties of the bright red panacea flower. Broiling heat. Drowning humidity. Complete isolation. The great ceramic domes and minarets of the Petal Houses are the only signs of habitation along the whole of the river, save for a few desperate villages hiding from the Houses' security forces.

Mouth-of-Ool - The only point in Ool where outsiders are tolerated. Do not tarry long, take your panacea and go. The Houses are watching, and they do not care for guests who overstay their welcome.

Acephavara - The "Land of the Headless", named so for its inhabitants (who do possess heads, but also typically have coloration patterns on their torsos that at a glance appear to be faces) and for the shape of their primary god (who does not have a head). Once an empire (Old Acephavara), but after the collapse and War has coalesced into the comfortable confederation common to much of the world.

Janashkut - An ancient, storied city. Unfortunately known best for the potent strain of ghoul-leprosy endemic to it (this is not the variety of ghoulishness that is Red Law in origin). Over the centuries, the oldest sections of the city have been sealed off and abandoned, forming its infamous labyrinthine leper districts, as new, sickness-free districts are built further out.

The Old Capital - A dead zone, thanks to the arcanonuclear weapons deployed here during the collapse of Old Acephavara. The ruins are beautiful.

The City Magpie - When humans returned to the city after the fall of Old Acephavara, they found this city to already have been taken as roost by the Murder of All Crows. It has since become the city of theft and the haven of thieves, where no one is permitted to enter with anything, even names, that trukly belong to them.

I love how, each time, it falls together a little bit different, and a little bit better. Stuff is missing or misplaced, of course, but it's the Bob Ross type joy of setting out all the pieces.

Next insallment will have the world as a whole, and there might be further installments going a deeper dive into the people who actually live here.

As for more commentary, it's slipping my mind at the moment.