The AI, uncreatively named VLC-1 (Very Large Computer), built 410 black boxes over the space of 16 months before performing a hard reset. Its final words were "Systems check: all good."

The black boxes are, like the flight recorders they are named after, are neither black nor boxes. They are dodecohedrons, with outer casings covered in swirling grooves that shimmer in shades of deep red, blue, purple and green.

A genuine means of faster-than-light travel, with no hope of there ever being more. The squabble over who got to use them was predictably venomous.

This changed when VLC-1.2 entered the negotiations. It had been pruned down from its previous iteration (and so left completely ignorant of the creation of the black boxes), but remained immensely intelligent all the same. It requested control of its predecessor's work, to serve as distributor of the technology and organizer of the multinational exploratory force that would use them. If the international community refused, it threatened to destroy the boxes and then itself, in total this time.

The superpowers of the world called a bluff, and were proven very wrong when VLC-1.2 began destroying boxes at a rate of a hundred a day.

It still took three days to ratify the agreement, leaving 110. That's all there will ever be, unless the mysteries are cracked open again.

"Here's a place where there used to be industry."
-Mike Polk Jr.

A long long time ago, a dreamstone meteor ended its eternal wanderings by swiftly and violently lithobraking in the sediment of a shallow interior sea.

Then they committed genocide.

They built a town on top of the meteorite, (though they had no knowledge of it) so they could cut down trees and dig up a certain kind of black rock composed of compressed corpses. For a few generations there was the sound of machines and of money changing hands, until it all ground to a stop.

Now there's no industry, no money, and no hope.

There is heroin, though.

Welcome to [REDACTED]. It's an absolute shithole. We know you won't send help, but we've got to ask anyway.

You cluster around the TV, with eyes glued to the stream. The rockets ignite, the column of fire carries the digitized minds of eighteen beings too rich to be human anymore with the roar of gods never to return to the earth.

They are leaving you here to die.

That was their plan all along.

There will be no more rockets. They have stripped the earth of her garments and they have left you here to die here with her in the sweltering night.

All that is left now is to wait and cling together, and dream for a while of what could have been the future.

A dead whale had drifted into the harbor during the night. Old age or sickness had claimed it, the tide had caught it, and now the carcass bobbed up and down on the oily water under the weight of the scavengers. Sleek black trilobites nibbled away at the corpse, under the screeching, squabbling cloud of gulls. A sea scorpion sat up by the head, tail curled, snapping at anything stupid enough to come close to it.

The smell of putrefaction mixed with sewage, salt and smog hung thick and heavy in the humid dawn air. The orange smear of the rising sun shone dimly through the smoky clouds to the east.

[She] dragged her vision away from the whale to look towards the city, a hazy blob spreading up and down the coast, rising inland up to the crown of Monolith Hill and its four ancient pillars. Those pillars dominated the scene, towering over the factory smokestacks and the tumbled, tangled carpet of the city on the lower hills. Those pillars were remnants of the [...], who had had ruled the world when man was still hunting and gathering in the wild places. Where the [...] had fallen from glory and their cities ground down into dust, the pillars on Monolith Hill remained.

Blake's Cosmology, As A Simple Diagram 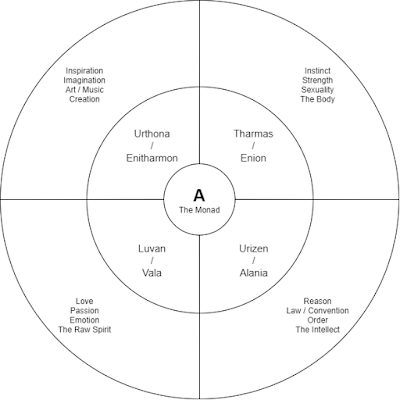 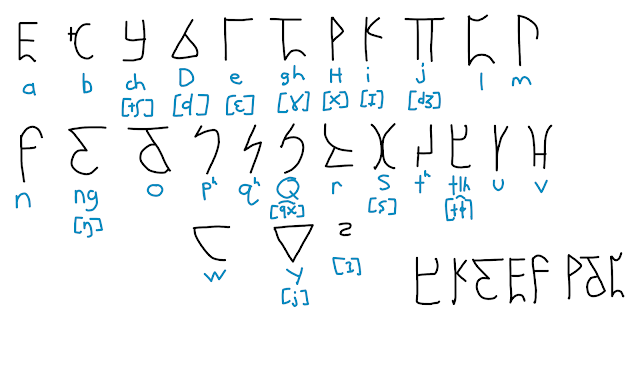