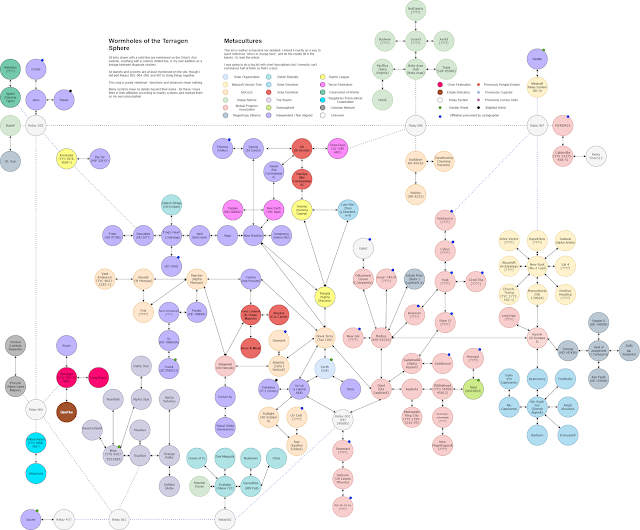 This is, I suppose, a sequel to the similar post I did for Eclipse Phase.

Orion's Arm is a long-running collaborative writing site about the gonzo space opera future ten thousand years hence. It is immensely inspiring (when it is not incomprehensibly steeped in jargon) and features a full two decades of material to sift through (of mixed quality, in that charming Web 2.0 way)

I binge it often, but the last week has been particularly extreme. Extreme enough that I pulled the trigger and did...this.

Space Map Fugue is real, and I have it. It is only a matter of time before it happens again, and space god help us all if I decide to do original work for it.

Given the blog that this is, there's an unstated intent to use it with something like Mothership, which is tonally the exact opposite of Orion's Arm. I was going to make a list of the fifty or so major factions of the setting (summarized so briefly that they could be ported over to MoSh), but I very swiftly realized that I literally could not summarize about half of them succinctly and the other I literally did not understand what they were. So instead I just provided the names of the relevant ones and color-coded the map - you can look up those articles for additional inspiration / context as you wish, but they are too dense by far for tabletop usage

(As an aside - the typical map quality on OA is decidedly...not. That is probably why I did this. For as much as I do love that site the map situation is absolutely untenable, unreadable, incomprehensible. There was a whole cluster of wormholes that I had to cut from this project because the two maps of the region provided absolutely no crossover with the planets supposedly in that sector and...I get it 3D maps are super difficult to show on a 2D plane but that's why we have abstraction.)

(Also: binging several hundred articles in the space of 3 days has made me enormously thankful for the SCP Foundation's standardized template and reference guides. That's some good QOL right there. And for more strict deletion and editing criteria on articles; there are a few OA ones that are literally just "An important Metasoft system" and have been sitting like that since December 2001.)

Why do I do this? Why is it this particular topic, out of all things, that will always trigger actual productive focus?

Maybe there's something to that. Hmmmm...