An underworld complex for Esoteric Enterprises, generated using the tables in that book. There won't be many more of these posts, now that I have switched over to hosting WIPs on my patreon - while they weren't really working out, I have to admit I liked them 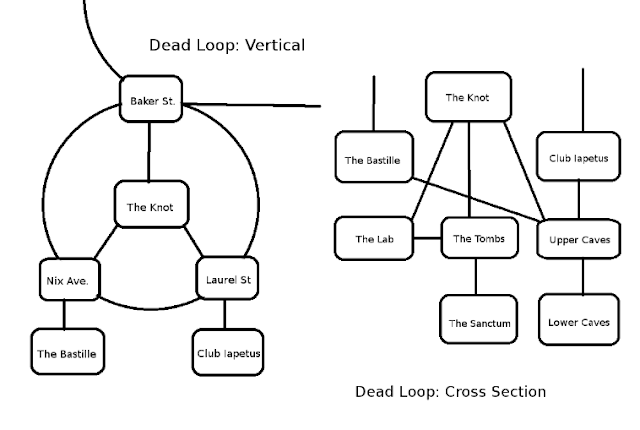 The Green Extension of the city subway was built to service the wealthy neighborhood of Bramble Hill, and had the luck of opening a month and a half before the recession hit. As the bouzhi folks lost all their money and fled town, leaving a neighborhood filled with mcmansions too expensive and ugly to sell, it became obvious to City Hall that there wouldn’t be enough passes sold to maintain the Extension, and they decided to sundown the route until things got better.

Things never got better, and now over a decade later the derelict Green Extension has become home to a wide variety of underworld denizens: a surface of smugglers and crime families atop the substrata cadres of sorcerers and chthonic beings.


Locations in the Dead Loop

The primary point of access to the Dead Loop, as it is still an operational stop along the subway’s Blue Line.

Provides easy access to Club Iapetus. Watched over by underlings of the Titans. Surface access has been sealed off.

Provides easy access to the Bastille. Watched over by members of La Croix. Surface access has been sealed off.

The sewers underneath Bramble Hill do not see much usage anymore, leaving them as a relatively-easy means of transit between the upper layers of the underworld here.

A den of debauchery operated by the Titans. Most folks coming to the Dead Loop from the surface do so to come here, to get their fill of illicit goods and eardrum-rending base. There are usually a few dero of the Conspiracy lurking in the walls: stealing snack wrappers, keeping an eye on the Titans, and whispering very bad advice to people.

Subterranean fortress of the La Croix, built in the expanded sub-basements of the Nix Avenue Station. Heavily fortified, the La Croix toll all passage through the Bastille, occasionally press-ganging travelers into service for Genevieve’s special tasks.

Built not by the humans above but by the morlocks below to inter their dead. Contains the remnants of all of the pack’s former eloi, which have as of yet gone undisturbed. The primary inhabitants are I Found This Humerus, though Court Basalt did attempt to send an emissary to meet with Zyraximander, to disastrous, melty results.

An ancient morlock who successfully decoded the works of their former masters, Zyraximander is a sleepy, slothful being whose incredible age and predisposition to introversion has left him out of most affairs in the Dead Loop, despite his incredible power. Mostly, he just wants to keep I Found This Humerus out of his sanctum and occasionally check up on the Gandobog Pack.

Cunningham is, at core, a fraud. Most of his method and techniques were pulled from scavenged serpent-men tablets from deeper in the caves. He has a crippling inferiority complex about this, and so makes up for it with his aggressive, aggrandizing demeanor. His work is good, don’t be misled there, but it’s good because the serpent-man methods of body modification were nearly idiot-proof.

Location means he services the La Croix regularly, though he has no particular allegiance with them.

Natural limestone caves inhabited by Gandobog Pack and a few holdout pockets of the Conspiracy.

Burned into service by Lithic geomancy, the entirety of the lower caves has been turned into the embassy of Court Basalt.


Factions of the Dead Loop

A minor cult of Vor Glaurung, notable in their tattooing their scriptures (illuminated, of course) across their entire bodies. A newer cult, so none of them has received the entire manuscript yet.

Antonio Zamboni used to be the top dog around here, back before the economy went belly up. The family still owns a good number of properties up on the surface and has their fingers on city politics, but they’ve almost entirely been driven out of the underworld by La Croix and the Titans. But, a change in leadership (Anthony’s brother Benito has taken over) has seen a revival of underworld interest, and attempts to wrest control back in their favor are underway. The Zamboni core of power is on the surface.

Genevieve La Croix and her clan operate out of the Bastille, a sub-basement stronghold below the Nix Avenue station. Genevieve is something of a gigantic heretic: adores the pomp and circumstance of the church, hates the whole morals thing, offers huge bonuses for anyone able to bring her a demon. So she can eat it.

Brothers Atlas, Prometheus, and Menoetius (Epimetheus seems to be missing), real names unknown, run the den of sin and pounding music that is Club Iapetus. They are all wannabe sorcerors of their own, using spoils from Book Club to further their own rivalries with each other.

These worshipers of the Leviathan have been blessed with the emergence of a true avatar, a Bentheoson. While the avatar serves as the spiritual leader, the practical leadership remains where it was, in Carol Dietrich. The two do not see eye-to-eye on anything and tensions are building. Haven’t established their own stronghold yet, have been looking at moving down into the Catacombs once the war is over.

A small smuggling band, specializing in the forging and sale of fake IDs. Headquartered on the surface, do business with the crime families.

I Found This Humerus

A band of experimental and terribly irreverent necromancers, attempting to recreate the methods of the lich Zyraximander. They make their camp in the Catacombs.

The local chapter of grimoire smugglers. Primarily a surface organization, descending either for trade or salvage.

A band of exiled Lithics, come up from the mantle to establish a new court. Found in the Lower Caves.

The local dero have recently accumulated around a new genius, who has introduced the meme of secret messages hidden in food packaging that filters down from above to his flock. Av dero always do, they have jumped into the belief whole-heartedly. They can be found basically everywhere.

The ophidian city that once stood here is long gone, but morlocks have long memories. This pack is particularly blessed in having two eloi, one of which was recently born. They live primarily in the Upper Caves.