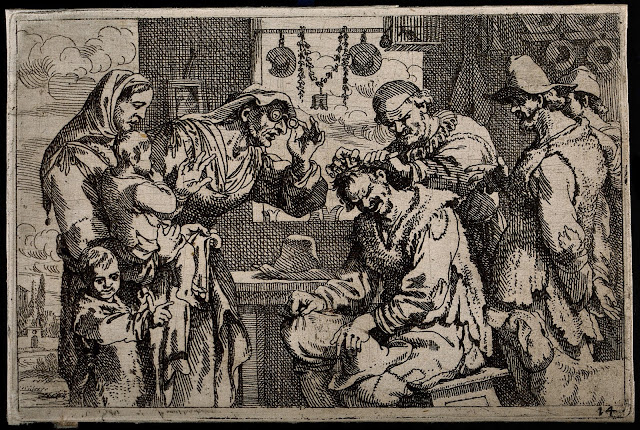 When you were a boy, your father would cut your hair with the same iron scissors he used to shear the goats. They were frightening to look at, but never once did he slip. He'd tell you stories he'd picked up from the hobos in town as his shears went snip - snip - snip... you can't remember many of them now.

But you do remember when he stopped. It was during the summer your little sister was born that your father kept his shears on their peg and took you into town to visit Mr. Jameson. The little bell above the door jingled as your father entered, and as you followed you had your first glimpse of the world of men. Those were the days where your father and men like him were as gods to you, and you sat in that black leather chair overjoyed at the thought of their approval. You were in on the secret now, a pilgrim who had taken the first step towards becoming a grown-up.

Years later, when you were no longer a boy but not yet a man, you strode into that shop with fuzz on your cheeks and a pocketful of pennies and ordered a shave with a straight-edged razor. Mr Jameson smiled as he always did, and the men gathered there commented on how fine you'd grown up, and your father tried to read the newspaper with his new spectacles. He didn't have much need for haircuts anymore, so he came for the good company.

Years later, you went away. You went to the city, got an education, met a girl, gave her a ring and a promise and your heart. She cut your hair, and you were happy.

And then the letter came. Your father was a dead. A stroke. Nothing to be done.

You wept then, and your lady wept with you. Before your tears had dried, you donned your hat and jacket and took the swiftest route home. It didn't feel real, even as you stepped through the door you knew each grain. To see your mother half broken, to see your sister married, to see a house that you knew was missing a person...it wasn't real.

When you had run out of tears you went into town, went back to the barbershop, ordered a shave and a haircut. Mr. Jameson had long gone grey, and the men you'd known as gods in your youth were creased and tired. The smiles were muted, their words quiet. And you knew, at that point more clearly than anything, that you would join them. You had become a man.

Anyone who claims that wizard is the opposite of witch is probably a wizard themselves. This is false (and the claim is usually attached to some nonsense about dancing around with no drawers on), and everyone living outside of academia knows that the real opposite of a witch is a barber. Women have witches, men have barbers - this is the way of things, and it has been a mostly-agreeable professional rivalry for a good long while.

Barbers, like their counterparts, are an integral part of small town life and an indispensable resource for dungeon hobos, providing medical services and a social gathering space. Barbers don't have any sort of magical craft as part of their trade, but to make up for that they usually have some sort of formal, degree-producing learning. They are not doctors, they do not receive doctorates (big city doctors get right pissy if you imply to the contrary), but they do know how a body works.

Barbershops that offer medical services to hobos will have a sign hanging from the pole bearing a sword and shovel tied together by red thread.

Prices are listed on a silver standard.


Playing as a Barber


Barbers are specialists, with the following skills and items.


Basic wound treatment heals d6 HP. It cannot recover negative HP or treat fatal wounds. There is no chance of infection if the wound has been cleaned and the tools have been sterilized.

Surgery restores d4*d6 HP, and can be used to recover negative HP and treat fatal wounds. There is a base 1-in-6 chance of avoiding infection, which goes up by one point for each of the following circumstances.

If this check is failed, the patient must make a save vs poison at -4. Upon failure, the wound becomes infected - the patient will only gain half of the HP from the surgery, will take 1d6 damage per day, and all rolls and saves will be made at a further -2 penalty. The patient may make another save against the infection once per day.