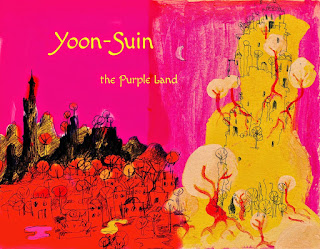 +David McGrogan’s Yoon-Suin is a southeast-Asian inspired build-your-own campaign setting with more tables than an IKEA. It is a campaign supplement of a very specific sort, enough so that I can't think of any others in the category.

Yoon-Suin is adaptable: it could be used on its own, in whole or only in parts, but it could also be thrown down in nearly any other D&D campaign without any great change at all: A mysterious ship has arrived in a nearby port, bearing exotic goods from an isolated, faraway land. Apply a hook as needed and the players are off to be strangers in a strange land.

The book itself is split into different chapters by region, plus a bestiary and appendixes. Each chapter is, rather than maps and lore and Important Personages™, filled with tables for DMs to construct a campaign. There are things that are always true about Yoon-Suin (the castes, the broad details of each region, the importance of tea), but near everything else is up to the dice.

The Yoon-Suin tables cover the width and breadth of things DMs might need: there are tables for factions, locations, lairs, NPCs, plot hooks, rumors, hirelings, poisons, treasure, drugs, teas, and things that are none of the above. Some of these tables are shared between regions, while others are unique to a specific location – Cockroach clans are native to the Yellow City, dwarf fortresses come into play only in the mountains of the moon, brothels can be found anywhere.

The introduction of randomly-generated social spheres for the party is probably my favorite part of the tablery in the book. It’s a matter of five minutes to make some rolls and start drawing connections between them.

“We’ve got a criminal band whose second-in-command is involved in adultery and the whole bunch is warring against another group. Then we’ve got a club-fighting troupe whose head trainer is doing something immensely foolish and thieves raided their treasury...”

The stories knit themselves together with minimal elbow grease, which is absolutely worth a gold star.

All of these tables provide ample material for modification as one sees fit (I’ve got a friend who would use them to make a weird Korea in a heartbeat), or just serve as a model if one wants to work on something of their own.

It is important to remember that this book provides the sandbox, not the castle. Someone looking for complex lore or pre-made epic quests in Yoon-Suin will probably find themselves a bit disappointed. People who love tables and fiddly bits have far, far worse choices they can make.