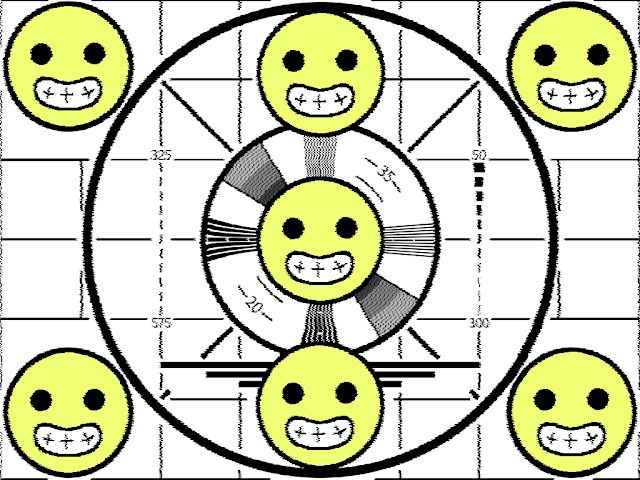 There is a smiley-face burned onto the CRT monitor. Its halo is a station test screen and its eyes are drops of ink and its teeth are made of scanlines and it is your FRIEND.

FRIEND offers you goods, in exchange for services. Only one good. The good is your continued existence, for the world does not care about the sweet unformed things crawling in your heart but the socially-arbitrated number shackled to your name and thumbprint, spiraling down to zero. FRIEND will give you numbers with which to purchase proteins and carbohydrates and electric current so as to extend the time before total cell death.

Do not call out for FRIEND: FRIEND already knows when the cupboards are empty. FRIEND will call for you and it is good to listen.

Satisfaction is simple. FRIEND asks for little. Dial the number you are given when it is done.

Do not bargain with FRIEND. Do not make questions of FRIEND. These will interrupt the delivery of goods. FRIEND will not cheat you.

The fading spray paint on the old brick wall. The peeling sticker in the window corner. The waitress who smiles just so.

FRIEND is a quest-giver in the purest sense: a disembodied voice that offers money in exchange for tasks. There are five things that are always true about FRIEND: None of these may be broken or omitted. FRIEND originated in Mothership, they will make an easy home in Esoteric Enterprises, and moving them to a fantasy setting is easy enough.

Jobs from FRIEND are always mundane and always odd. Things like:
They will inevitably involve complications outside the scope of what the players will be prepared for. Things like:
And it only gets worse from there.

2) FRIEND always has a follow-up plan.

FRIEND is relatively forgiving of failure, in that FRIEND is more than willing to make you clean up the mess that's just been made. Or finding someone else to do so. No matter how badly things seem to be, FRIEND will not panic, get angry, take offense, or indicate that there's no way forward.

3) FRIEND always has more cells in the field than just you.

Operational security means that crossover between cells is limited to desperate circumstances. There is only so much additional support FRIEND can or will give. You are not going to make buddy-buddy with members of other cells. The presence of friendlies will be marked only by symbol and coincidence. FRIEND will not make any direct introductions.

Your death and potential total failure are within the acceptable operational parameters. But, this does not mean that FRIEND will leave loose ends: if there is something to be gained from your recovery, FRIEND will likely make an attempt to do so, and pass on the wreckage to another cell.

Everything else falls to you. FRIEND rejects canon.
Posted by Dan at 7:00 PM