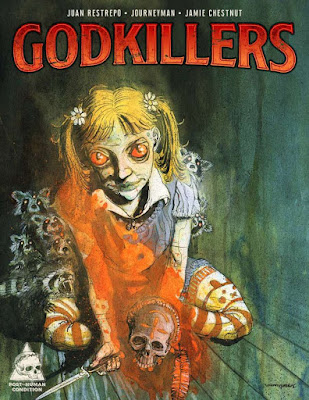 What is it?: A post-cosmic-horror module set in Louisiana, using Open d6 rules and fantastic art.

God damn, this is how you do it. This goes right on the shelf of gold standard RPG books.

The Gardens of Ynn

What is it?: A crawl through a wild faerie garden plane and a great new pointcrawl system.

Gardens of Ynn has one of my favorite new means of making an adventure: the depth system. Think of it as something like a pointcrawl, but a touch more abstracted. Roll d20 + the depth level you are on now, find out what area you arrive in next. Each area comes with features and encounters. Don't like the level you're on? Go back to a previous level and re-roll when you press on deeper. It's clean, it's easy, and it's the kind of megadungeon I can really get behind. Big on scale, small on gribbly bits bogging down the middle of things. I want to see this applied to everything, especially a city supplement like Corpathium. It is RIPE for that sort of thing.

What is it?: Library of Babel, running on the same template as Ynn. I like it flavor-wise even a bit more than Ynn, but the core of it is the same, so this is a really short review. It's good, yo.

What is it?:  A trio of short zines for running DCC adventures in the American Weird West.

DCC zines are a special breed and I've still got no idea as to what makes the magic work, but it certainly does. Between the three volumes there are three new classes, a bit of setting fluff, a 0-level train robbery funnel (plus backgrounds), magic items, gun rules, patrons, and other goodies.

What is it?: A casino station module for Mothership.

This is, as far as I know, the first 3rd party module for Mothership. It's a mixed bag.

BUT:  It's difficult as hell to read  - lots of text, text often small, fonts hard on the eyes, had to read through several times to get a grip on how everything relates to each other because of prior factors.

The ASCII is a good aesthetic touch (and clever way to save on art budget) but can be hard to parse. Lots of good tables, you could even use the movie prompts for other MS adventures.

Each segment / scene of the shit-is-happening part of the module fits on a single page, which is quite nice, but information presentation once again reared an ugly head. I'd need to write everything out just to keep track of it all.

So I remain of two minds. on the one hand, yay, more Mothership stuff, and there's stuff I can use! On the other, there's a whole lot that would be a whole lot of extra work to use.
Posted by Dan at 9:03 PM