You Remember Our Venerable House...

Joseph Manola made a player class for gothic villains. It's great, it's hilarious, and it's a bang-up scenario and NPC generator. So to that final end, I ran through ten levels of dark secrets to determine what has befallen the once-great house of Lethelock, centered on its current scion, Heironymus. 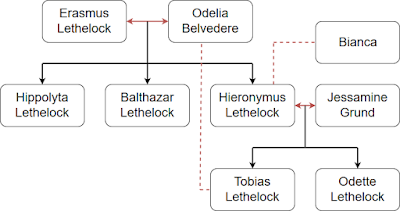 A man too mild for his station: too immersed in his library, too easily trodden underfoot by the machinations of his wife, too indulgent of his children. His crimes were those of cowardice and omission, for while he never agreed with the depravities of his family, his silence offered tacit acquiescence. Perhaps he doted upon and tutored his grand-daughter Odette as a form of penance, knowing that it was too late to change his own course or clear the fog of age from his mind. It was not until after her madness and institutionalization that his guilt mastered him: just before dawn, he put a pistol in his mouth and blew his brains out across his precious books.

The family's fortunes had already been on the decline when she married Erasmus, but she exacerbated the rot to such an extent that one would not be wrong to trace all the ills back to her. She introduced the worship of the dark old gods of the Seven Heresies to the family. She ordered the killing of Bianca, to maintain control over Hieronymus. She seduced Tobias and furthered his corruption, encouraging him to aim his cruelty towards Odette until such a point that she and her dangerous ideas could be removed. She believes still that she might return the family to its former glory, but she has yet to reveal how this might be so.

Woe-begotten scion of the Lethelock estate. As a young man, his dissolution was legendary: whoring, drinking, gambling, blood sport, sorcery, nothing dark was beyond his sight. All of this was encouraged by his brother Balthazar, with whom he destroyed the family's fortunes in a failed brothel management scheme. Destitute and abandoned by his elder brother, he returned home to manage the estate for his ailing father. For a time he was happy, finding a dalliance with the townswoman Bianca, until she was killed by the order of Odelia and a marriage was arranged with Jessamine. In the two decades since, he has been left a hollow shell of a man, lingering in the shadowed halls of his ancestral home.

A most brutish appearance belies a charisma fit for kings and prophets. He spends it all in the gambling houses and brothels in harbors up and down the coast, picking up doxies and diseases without care. He is struck by wanderlust, returning home only for a few weeks after months abroad. While the oldest of the siblings, he willingly gave up his inheritance of the estate to Hieronymus. He was the mind behind a venture that destroyed what remained of the family's fortune: a floating brothel, filled with the delicacies and courtesans of exotic lands. The keel never touched water. Hieronymus was always his accomplice in debauchery, until the younger brother lost his taste for it and the elder went further abroad.

Joined an order of mendicant nuns as a teenager, devoting her life to charity and service. It would have remained so perhaps even to the end of her life, were it not for the letters from her brothers and mother that arrived at the chapterhouse. Through canny argument and dread revelation, they cracked her faith in the Bene Dei and sowed the ruinous seeds of heresy beneath. Unable to wrestle her struggling soul into submission, she blasphemed in the presence of the Mother Superior and was sent to a hermitage for penance. Isolation and rigorous chores have done nothing to dissuade her of the horrible truth.

For a time, she seemed destined to break the chains of decay that shackled the family. She was sent abroad to study with what little money remained in her grandfather's coffers, far from the influence of Odelia. She was a bright and shining paragon of all good things in the Century of the Fruitbat, but all bright times end. She returned to the estate. As the elder sibling she would inherit the title, and this would not do for the plans of Odelia. The psychological tortures inflicted upon her by her brother Tobias proved too much for her; after half a year, she suffered a mental break. Odelia did not hesitate in sweeping her away to a mountain asylum, and with some hush money paid to the owner, fabricated her death, leading to Erasmus' suicide. Years of isolation and negligence have ruined her.

If his father and uncle were exemplars of vice in their youth, he has revealed them as rank amateurs. He spends his days in an opium haze, he tortures animals and servants for amusement, he had no qualms about his grandmother's advances, and his hatred for his sister is bottomless. When given an excuse to destroy her and become heir of the family, he leapt at the opportunity. Witless, illiterate, slothful, gluttonous, he is a puppet of Odelia through and through, though he imagines himself fit for a king.

Daughter of a distant noble house, brought in by Odelia to marry Hieronymus. She cannot stand the sight of him and considers the family to be a wasted ruin. Her keen analytical eye gave her some benefit, though, in that she was able to find a means by which a lawyer could transfer the small amount of inheritance still in Hippolyta's name to herself. She has safely stored it back at Grundhome, for such a time when she might rid herself of this damned family.

A candlemaker, beekeeper, and herb-seller from the hamlet. Killed by the command of Odelia, so as to make way for Hieronymus' marriage to Jessamine Grund. By all accounts she was a plain woman with ordinary virtues and ordinary vices.