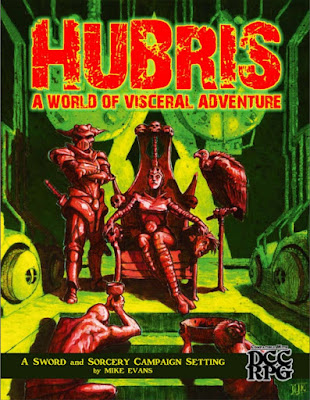 (I recommend queuing up the LISA: The Painful / Joyful soundtrack at this point. I think it fits quite nicely.)

First, the setting: It’s a blast. A crashing chaos that manages to form a coherence of its own terms by finding an image / voice / theme, knotting everything up, and running with it. A strong current of black humor (wet and American, rather than dry and British) maintains a thematic throughline throughout the book. Things are horrible in Hubris, and the land is filled with horrible people, but it revels in its horribleness rather than trying to persuade the reader that it is Incredibly Serious Stuff.

There’s a giant robotic dog with a city on its back. Every single location sounds like the name of a high concept metal album (ex: Slavering Maw of the Heathen Below, Metallic Fortress of End Times, etc.) The most pleasant god to deal with is literally called the Stillborn Unwanted Child. The magical item table can come up with things like “Dehydrated Bugle of the Lamentable Baboon”. There’s a spell that turns people into furniture. On and on it goes: there’s nothing boring in this book, nothing wasted. I know exactly as much about Hubris as I need to know, and everything I learn is something I can use.

I’d like to propose a sibling to “keep it simple, stupid”, and that is “make it usable, dingus”. Hubris embodies both with flying colors. Everyone else (read: people outside the DIY-sphere) should take note: I have spent FAR too much money on RPGs that buried all their good ideas beneath a godawful puzzlebox of wonky mechanics and overwrought lore.

This segues into the second part of the review, which is the design beneath the setting: the book is useful. It’s possibly even too useful. It works as a single work, but twice as brilliant is the ability to open to a random page and instantly find some way to use what you find there. Pull out a spell, a god, a location, a monster., a class, a background, a race, whatever. The random tables are potent and fast and have the same punch as the rest of the book.

My favorite piece of all is the addition of “Lay of the Land” tables. A simple enough concept (“here is what is in that hex, as an alternative to a direct encounter”), but beautiful in its simplicity and effectiveness. Anything the characters run into on the Lay of the Land table could be turned into an encounter, a quest hook, or even just a memorable image-moment. It’s all about what you see, rather than what you have to stab, and so wading through hex after hex of intractable swamp doesn’t have to be boring. You can just admire the scenery as the disease-carrying mosquitoes eat you alive.

It’s a hell of a ride, and for my part I say that the Ennie was well deserved.
Posted by Dan at 8:40 PM