So I found the question list for #RPGaDay2017. Since it's Sunday and the Great Discape Part 3 is still cooking, have some content-less content. Lightning round!

1st) What published RPG do you wish you were playing right now?

Yes. Yes, I do wish I was playing an RPG right now.

The real answer is Hellboy by way of Delta Green, with the Unknown Armies sanity system. Or +Mike Evans' Hellboy hack for Barbarians of Lemuria. Something like Hellboy.

2nd) What is an RPG you would like to see published?

Conceptual: The (blue arrow, not blue people) Avatar-meets-Bebop space opera / space western that exists only in my dreams. Also more space fantasy in general. More things that don't have elves in them or more things that actually care about the elves that get put in them.

Is actually in the process of being published: Stars Without Number: Revised Edition

3rd) How do you find out about new RPGs?

There's an owl with one eye and a red head that will occasionally show up on my porch, vomit up some pellets, scream horrifically, and then leave.

Carefully disassembling the pellets and reading the bones (have to use the stove for it, don't have a proper fire pit) will reveal upcoming RPG releases.

(I read blogs and sometimes osmose information other people leave lying around.)

4th) Which RPG have you played the most since August 2016?

5th edition D&D, then Dawn of Worlds, then some LotFP and Degenesis Rebirth.

5th) Which RPG cover best captures the spirit of the game? 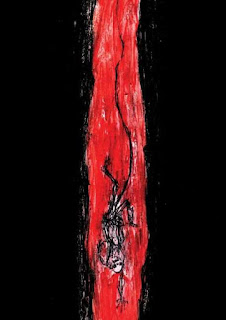 Veins of the Earth - It's dark, claustrophobic, and terrible in its simplicity. In the "creates terror" sort of terrible, not the other kind.﻿


6th) You can game every day for a week. Describe what you’d do!

I would game every day during that week. The answer to this question seems self-evident. Given current circumstances I can't afford to be picky if an opportunity is just handed to me like that.
Posted by Dan at 12:59 PM

Email ThisBlogThis!Share to TwitterShare to FacebookShare to Pinterest
Labels: RPGaDAY2017