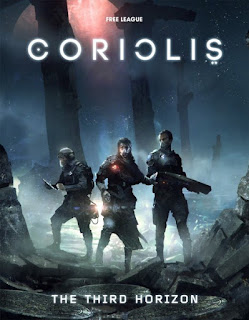 I’m taking a momentary break from the OSR offerings to review Coriolis. For those unfamiliar, it is a  sci-fi RPG developed by the Swedish group Modiphus Entertainment, who were behind Mutant Year Zero. I managed to pick up my copy on Free RPG Day; my local shop went and had the hardcover core book sitting right there on the table next to VAM! I actually asked the guy at the counter if it had been misplaced. It wasn’t.

I should have gone for the Dungeon Crawl Classics hardcover instead.

Coriolis is not a good game. There are individual pieces of it that are good, but the game as a whole is put together atop feet of clay. I couldn’t see myself ever using it, outside of maybe taking a few examples of its positives and utilizing that in another game.

The primary positive I will give Coriolis is the following: It’s a game about flying around space having adventures with a crew of colorful characters, and so the ship and crew as a whole are the first things in setting up a game. Before anyone gets to character generation, the group decides what kind of crew they are going to be (merchants, explorers, pilgrims, mercenaries, etc), settles on the group’s patron and nemesis, and chooses a group talent.

The game provides a small selection of pre-made ships, but the fun is in the construction. Basic ship types are expanded with modules and additional features of the builders’ choosing, with things like mechanical quirks and shipyard of origin coming into account. This all determines how much debt the party owes on the ship when the game starts (50% of total cost)

While I do like the idea of debt as the driving, over-arching motivator and long-range goal, this is about where the good ideas stop. The rest of the book has essentially no support for the act of actually making money – no tables of bulk-good prices, no tables for discoveries or artifacts and reward costs.

(This is as good a time as any to say that the book does an awful job of providing DM tools. There are tables, but they aren't incredibly helpful.)

The central die mechanic of the game is simple and I’ve got no issues with it. Attribute + Skill Rating = # of dice you have to roll. Success is on 6, more than one 6 is a great success. Characters are easy to build, though customization options are on the lower end.

I do give a sideways glance at the system of DM intrusions (“Darkness Points”) that the game gives the DM as determined by actions of the players, but it’s not a deal breaker. It’s just a bit silly to me that the thing with the horrible gangrenous mouth can only infect you if you used a specific talent or flew through space without using the stasis tanks.

The real deal breaker, though, is the setting. My stance on setting in RPGs is simple – if you are going to bother publishing a setting along with your rules, make sure your setting is worth using. It’s got to have something that catches my eye and imagination so that I want to use it, instead of just using the general ruleset for a world of my own devising.

The setting of Coriolis is practically a case study in how to waste space: it provides nothing that a decent DM could not do better with elbow grease and the Stars without Number planet generation tables. The creators of the game have described it as “Arabian Nights in space” (as one can see on the blurb on the back cover), and I have significant difficulty finding any legitimacy in that statement.

1001 Nights is built upon the frame story of a woman using her wits and storytelling skill to avoid getting murdered by her husband. This format could be used (and absolutely should have been used) for this core rule book (the mechanics section would be a bit difficult, but I’m sure someone could do it), but the setting chapters have absolutely no excuse. Illustrating a setting through hearsay, tall tales, spacer superstitions, news from foreign ports, folklore, and lies that might have something beneath them, all told by a single narrator? I adore the idea. It doesn’t happen here.

What does happen is twofold: we are introduced to a great number of ideas that don’t get fleshed out enough to even be evocative, and it is revealed that “Arabian Nights in space” translates to “there are some Arabic names, and a page about clothing, and one of the enemies is called a djinn.”

Coriolis is Middle Eastern flavored about as much as Firefly was Chinese flavored: not in the slightest substance beyond the superficial. It does not evoke, it pays lip service.

<Aside> Somewhere in the ocean of unused ideas there exists a wuxia-western space opera that sits right at the juncture of Avatar: The Last Airbender and Cowboy Bebop and my heart aches for its absence from our cruel, merciless world. </Aside>

It’s boring, terribly boring.  And most of it is just that, save what I would mark as outright creative cowardice: the primary religion of the Horizon.

Now, I find religion in space to be a terribly interesting thing to wrestle with, especially when dealing with the technological and cultural developments that will put pressure on faith systems to adapt or die out. Here we have an ostensibly Mideast–inspired setting that not only conveniently lacks Mideast religion(s), but replaces it with something far less interesting.

We are treated to the Church of the Icons, a religion with a strong central hierarchy that worships a nine-aspect god and has female leadership. It’s the Church of the East + Faith of the Seven, except with nine of them, and also in space.

There’s no form of Islam to be found, or even anything that seems to be its descendant. Jews are right out. Christianity only gets its knock-off brand. Zoroastrians are nowhere to be seen. Yazidi? What's a Yazidi?

Any sort of meaningful conflict, discussion, or exploration of real-world religion and culture through a fantastic lens is thrown right out the window and they don’t even have the decency to replace it with the fun kind of space gods.

It’s boring, it’s lazy, and it is pushed every chance it can be. If there is a focus in Coriolis, it is the Icons.

But even then the game can’t seem to focus on an element of its setting long enough to actually do it justice. On top of the Icons, we have the following to deal with:
I make these seem significantly more interesting than they are. If the game could focus even a slight bit on any of these, start using more evocative language, perhaps start tying things together into a cohesive whole, and present the information in a gameable way, there would at least be steps toward being a good setting.  We could have gotten that feeling of infinite fantastic adventures in fantastic worlds, never knowing what tale will be told the next night.

But we didn’t. The game even flat out says that the mystical parts could just be kept as spacer stories – it is that unimportant to the game as a whole. Coriolis is sci-fi that is neither hard nor soft enough to maintain interest. It is gummy oatmeal.

With such a weak setting, there’s really nothing to recommend this game for. Just having a passable system doesn't cut it with the price of entry.
Posted by Dan at 2:03 PM