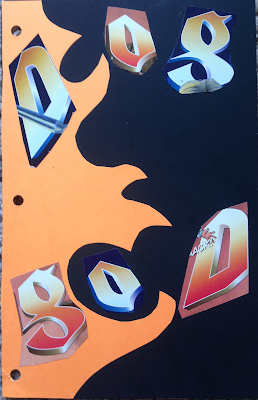 DOG GOD is a cut-up zine.

Those old Dragon magazines weren't going to be of any other use and I was bored.

This is volume 1. Further volumes are dependent upon me bumming more old magazines off my friends.

In full seriousness though, this was a load of fun to make and I can't wait to make more of them. There is a certain therapeutic joy in cutting stuff up and breaking out the glue sticks. Collage does not get nearly enough play in this weird little rpg scene of ours, despite it being an art form with a barrier to entry so low that you have to dig to find it.

The magazines used for this zines were a pair of Dragon issues from the turn of the millennium (Nov '99 and Jan '00, I believe), which I had bought several years ago in a used bookstore.

They were pretty awful. Turn of the millennium D&D, right on the dying breaths of AD&D and the dawn of 3e, was awful. Modern D&D's milquetoast blandness is manna from heaven compared to the simmering stew of racism, sexism, mediocrity, and utter lack of humor that existed two decades ago. It is from an age before the development of self-awareness.

But at the same time, it is a fascinating archaeological look into the past of the hobby - ads for video games that no one has heard of by companies that no longer exist. Some actually really good art tucked away between pieces that can only can be described as "certainly an attempt". There is a certain personality here, even if it is an odious one.

I cannot believe that Knights of the Dinner Table was a comic that existed.

Email ThisBlogThis!Share to TwitterShare to FacebookShare to Pinterest
Labels: DOG GOD, games I made, zine