Adul-Atpah, Undercity of the Corpse 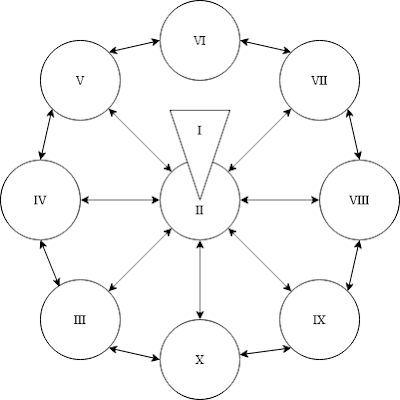 (This was all generated with Michael Raston's Infinigrad tables, for use with Esoteric Enterprises)

Adul-Atpah was one of the cthonic leviathans, those beings who sleep away the eons deep in the underworld and whose dreams seep into the stone and bone around them. Dreams that became a city of narrow streets, leprosy-grey stone veined with scab red.

The inhabitants are human, but they are not the humans who have livedunder the light of the sun for a long, long time.

An ixionic false-sun offers dim light, but the perpetual haze prevents it from ever shining particularly brightly.

I. The Gate of the Thirty-Three Heresies

A misshapen, crumbling ziggurat of red clay whose peak is forever cloaked with clouds. Its tiers and terraces are engraved with layers of bas reliefs, monsters pulled from the nightmares of Adul-Atpah.

The war with the White silk Veil was short, but devastating. While the cult of was driven from the city, Adul-Atpah was killed. Now for beings such as leviathans, death is mere interruption, the city has not recovered: The central district surrounding the gate has taken on the aspects of flesh and bone and organ, as if some grand

A mostly-unpopulated region on the border between the Liquor Farms and the Temple District, leveled during the war and now serving as in-fill for its neighbors.

Demon liquor is perfectly fine in a raw state, but proper occultists and gentlebeings of taste demand the refined stuff. It's good money, great money, and so the refineries of the Czapath belch oil and smoke and fire into the shimmering clouds at all hours.

Fog-choked terraces of farmland crawl up the outer slope of the city, taking advantage of the leftover divine vitality of the city's dead patron to supply food for the entire city and regions beyond.

The dream-larvae of Adul-Atpah and the godling parasites that burrowing in its flanks can be found here, where the ground has opened up into the steaming pits of primal oneiric sludge.Shoddy, leaning shacks and tenements cluster around pit lips, as if hoping to fall.

Death is strange in the underworld. Sometimes it doesn't stick quite right, and folks have to be careful about what they do. It can't be pushed to the side. Here, as elsewhere, the dead have been given a section of the city of their own, so they cannot be ignored. Blackened columns and markers are pushed together like a jaw with too many teeth.

The city's industrial center, exporting crafts and metalworks out into the underworld. Brutalist factories whose flanks bear henna-patterns of rust and bored occultists on lunch break.

The little city, the district of stands stalls and tents. A splash of color and noise against the rest of the city.

Mountains of rubbish fill up the gaps between jutting blades of rock. Where there is space, it is filled up with little temples and shrines to the gods that the city will permit. That they have been relegated to the dumping grounds in the city of the Thirty-Three heresies is not lost upon anyone.