Some thoughts about Kings of the Wyld 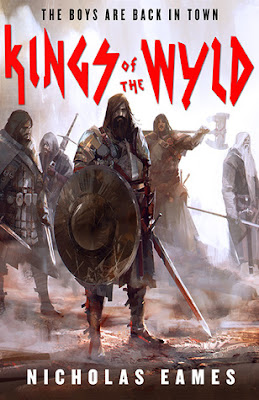 Kings of the Wyld is, as far as my experience has yet taken me, the epitome of post-D&D fantasy. Normally I would use that phrase as a signal to run for the hills as if the Martians themselves have arrived, but here I bring it up in the less pejorative sense: It is a book about Dungeons and Dragons.

A fitting end to a month that began with "Lean Times in Lankhmar" and ran on through The Hobbit with great enthusiasm. From Appendix N to an OSR love-letter.

The premise: four old grognards (two fighters, one thief, one wizard, one barbarian), long-retired from days of monster-slaying, treasure-hunting, and rolling on the carousing table, are back for a final gig: the rescue of one of their daughters from a besieged city. I can picture the character sheets in my head, scattered across the table where miniatures roam.

There is not a single original bone in the entire body of this book. Not a one. Put your hand on the core AD&D books, inhale deep your memories, and you will have Kings of the Wyld. Add two or three bits from Final Fantasy to taste. There are owlbears and ankhegs and legally-distinct murlocs, for heaven's sake.

OSR loveletter it might be, a paean to the DIY ethos it is not.

If there is a single original bone in the book's body, it is this: the mercenary bands of Kings of the Wyld are treated as we in the mundane world would treat rock bands. They go on tour, they take gigs, they have managers. They dress up in face paint and play in arenas and have band names. I was quite fond of the idea.

Don't take this all as particularly damning criticism of the book. It kept me engaged and entertained, and it is a very swift read regardless. I always give bonus points for works that know what they are and attempt to do as best they can, and by that criteria I'd judge the book is a success.

There are some jokes that fall flat, quite a few moments of clumsy exposition, some plot points a touch too convenient, some references clunky in their bald blatancy, some moments that skimmed too close to weird modern tweeness that will date them hard. But never enough to where it wobbled in the danger zone - the book is much too swift for mis-steps to do that much damage.

As an aside here, I feel like I should mention a particular bias of mine: I normally can't stand modern fantasy that is so blatant with it's D&Disms. Bring the topic up and I turn into some bizarre parody creature; half grog longing for the old days, half a weirdo desperately demanding something novel and new. Mentioning litRPGs will most likely send me into foaming paroxysms.

Aside over, all you really need to take away from it is that I'm getting to my finale.

Kings of the Wyld copies D&D whole cloth, but I found myself enjoying it because it is about D&D (and specifically OSR D&D at that), a category of mine that currently only holds Dungeon Meshi.

This is the strongest aspect of the book, the part where there is sincerity and heartfelt emotion underneath really come through. Rough as it is, credit where it's due. It ain't high literature, but it's honest. I like honest.

Now then, off to the next book. Shall the Lord of the Rings re-read continue? Or shall it be The Princess Bride? Or more LeGuin? Who knows? I certainly don't!

An indecisive bastard, am I.

Addendum: There is one point that gets muddled over the course of the book, and that is the treatment of the "monstrous" beings. Here and there I ran across moments brushing against that barrier, where the conflict is presented in terms more equal and humanity is stripped of its self-righteousness (the arenas where monsters are enslaved and murdered in mass in the arenas, the besieged city-state of Castia rose to prominence by, you guessed it, murdering and subjugating the locals who were there first, the several allied monstrous side-characters, even Clay's constant questioning if he is to be the monster or the man), but those moments are fleeting, passed over for big climactic action. Emmy Allen this is not, and the book is weaker for this part of its faithfulness, to point questions at this aspect of the D&D experience but to not follow through.