Some thoughts about Mordenkainen's Tome of WORDS 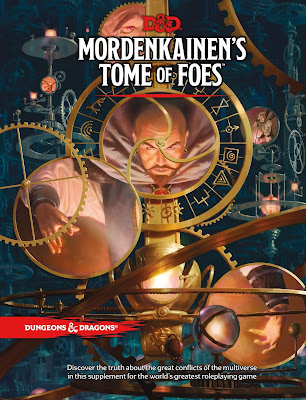 It is legitimately difficult to read the first five chapters. Eyes go glazed like a donut almost immediately. It is so bloated, so vacuous, so pointless. It's the text equivalent of using sawdust to extend mashed potatoes. Sifting through for the interesting stuff is a chore, made worse because there is actually good stuff in there, but there is a tenth as much usable material in a book of this length as there should be.

The Blood War is nonsense


I actually really like the law / chaos division between devils and demons, I even like them fighting each other, but this is nonsense. An entire chapter is spent detailing in painful specificity their endless conflict, and not once did I see the prhase

in the entire blasted thing. It's a prime scenario for the players to get their E1M1 on, and there is no support for that whatsoever. There's some babblety-bibble about keeping balance between the two forces so that neither wins, but that is boring.

Devil military units being named like Culture spaceships is cool though.


Corellon is an abusive dad-mom who has entrapped his/her children in a neverending cycle of death and rebirth, unable to permanently return to elf heaven, in which they are perpetually reminded of all their past lives and the boundless disappointment of their mother-father, because he-she disapproves of their life choices. The book tries to frame this as a good thing, but Corellon's really just an asshole.

The whole "elves can transition their sex" thing is limp-wristed faffery, so I am going to stat up Gethenians instead


The book inadvertently her look sort-of in the right, at least in the beginning. She started out heading the faction of primal elves that wanted static bodies so they could do something with their lives instead of farting about being fey and twee and mystical all the time.

Also Ellistrae is Luke, I guess.

The Duergar did nothing wrong


Moradin is just a dick who blames the victim. They're got the best lore so far, too - duergar are teetotalers because booze triggers their horrific ancestral-memory PTSD.

The Astral Plane is apparently just space, but filled with god corpses


Right then, I know where we're headed in the future.

The art is excellent


This really isn't much of a point, as the official 5e stuff is overall fantastic. This keeps up the good trend.There are a few re-used assets here and there, but hey, I don't own those books.

None of the archdevils are wearing business suits, though


This is a silly way of saying that I don't feel that there's enough stylistic differentiation in how devils and demons are presented. The archdevils do not say "this is a being of terrible law" to me. The demon designs are okay, though. They get the point across.

The bestiary is A++


Now we get into the actual good stuff. The major complaints are done and over with, this is the worthwhile part of the book. They brought their A-game, and it's nice to see that there's life still the dusty corporate bones


While part of me says it'd make more sense for hippo-headed guys to be demons, on account of the oceans of bloodshed that inventively follow in their wake, I love seeing them. You can do silly British voices for them, it's great.


Seasonal Eladrin get a thumbs up


Anything that makes elves more nature-spirit-like and less like humans with pointy ears is great in my book. The art for them is fantastic, too. It's mostly just ornamental, but hey, it's something.

Sorrowsworn are better demons than the demons are


They're the embodiments of mundane aspects of suffering: anger, hunger, loneliness, being lost, overall wretchedness. They make sense as lost souls given in to despair. I want to use these guys to that very end. They get the point across.

Star Spawn get the short end of the stick


Five monsters with one piece of art. There's so much space wasted on elf gods and halflings being twee, but we get no support for the big lads from beyond the stars. There's a name list and some cultist blessings, and that's it. Why bother having them, then? Devote to your bit, guys! They have always felt like a fifth wheel, and that's because they never get the support that's needed. I'd almost want to devote a lore chapter to them, but that would involve making a large new lore thing that shakes up the status quo. Having nothing is probably better.


This is a book that epitomizes "if you want something done right, you'll have to do it yourself." If you want it to work, you have to work for it. In a lot of cases I would say that the work required isn't worth it, but here that's not really the case. Long expanses of WORDS are annoying only as long as I have to read them, and I shan't be doing much of that. I've got sticky notes, I can find what I like and ignore the rest. The bestiary is what I am here for, and it has delivered. I'm interested in 5e for the first time in a very long time, so that is an accomplishment in itself. I want to run something with this book. It seeks to be used...

Guess what time it is, kids