Some thoughts on the Tome of Beasts 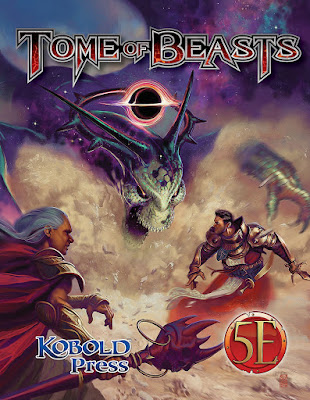 Had some leftover Amazon giftcardbucks, picked up the Tome of Beasts. Here are some thoughts on it.

This is a Fifth-Edition product

If you're the kind of person that rolls their eyes at challenge ratings and HP in the hundreds, it's still certainly usable, but you'll have to put more work into making it work for you. If you're a 5e fan, that's not going to be much of an issue.

The art is great

Exceptions exist, but even then the entries that are just mediocre in comparison to the rest of the art outnumber the properly bad ones, and the good stuff outnumbers both. It's solid, nicely evocative stuff, and "monsters that I want to use just because I think they look cool" is my baseline for judging a bestiary.

The words are poor

The quality of text in Tome of Beasts is, frankly, unacceptable. I have not read a single entry that is not stricken with redundancy, fluff, chaff, dead weight, bloat, stating the obvious, or filler - they're all generally as evocative as a brick. They're tiny little entries and they paradoxically manage to still waste space.

Ignore it. Stick a post-it note in there and write your own, the names and pictures will provide all you need.

"The hulking bearfolk are intimidating creatures", says the text near the picture of a bipedal grizzly bear with an axe.

It reminds me of the 3.5 Monster Manuals

In both good and bad ways. It's filled with obscure "why did you think of this?" variants of common monsters,  strange "how am I ever supposed to use this" monsters, "this is cool, why is it designed as a combat encounter" entires and "what is even going on with this page?" entries.

For my own part, I find a sort of charm in it - the odd sort of weird that doesn't want to let go of "palatable to a wide audience" and dive headfirst into the "OSR-land of cannibal mutant snake cultists" just yet.


Many of the monsters have a shared theme or origin

This is something I found quite nice and helpful - an easy way of populating dungeons with encounters that mesh well together, and you can build up factions and their interactions with each other or within themselves easily enough.

There's a setting behind the book

From time to time there are side notes and boxes detailing Kobold Press' published setting, which is often reflected in the creatures themselves: there's the Norse-themed monsters, the Egyptian-themed monsters, and an underground empire of ghouls.

It's not particularly intrusive, and overlaps with the point above, and so can be handy for the same reasons.

Please be more creative with your usage of breasts

I'm not going to harp on you for featuring lady-monsters in diaphanous states of undress, Kobold Press. But I will absolutely harp on you re-printing the same monster four times. Five times? They blur together

"Watery tart who lures men to their doom with sex appeal" applies to the eleinomae (swamp-nymphs), the lorelei, and the rusalka. Then you've got the abominable beauty (who isn't aquatic, but picks up the slack on diaphanous undress from the rusalka, who remembered to get dressed this morning), two very visually boring dryads, and the drowned maiden, who is just the rusalka again, except just angry and sad about being dead instead of seductive. She's cool.

Vary it up, guys.

Like the 5E Monster Manual, Tome of Beasts provides a separate stat block for every stage of life for all six variants of dragon, all seven varieties of giant, and every other creature that could easily be summarized with "as [creature], with [special features]".

Please, for the love of all gods above and below, please stop referring to everything in the plural. It's okay to have unique monsters

The difference between a monster and the monster is a valuable one to make, and can have a  dramatic effect on how a monster is viewed and the impact it has on the players.

_Tome of Beasts_ does not make this distinction, which I find to devalue of cool or goofy monsters. Granted, if one ignores the text that the book provides, as I already recommended, this is far less of an issue. I'm still annoyed by it.

Including but not limited to:
I like the elemental dragons

There are at least two instances of the text describing the creature with a beard and then the art showing no beard at all.

There are standards a man must hold himself to.

They gave the sphinx a table of riddles

That's a gold star on the Good Noodle board for you, Kobold Press.

The book doesn't set out to break any boundaries or break up any statuses quo, it falls short in places but succeeds quite well in others. Definitely geared towards people very much wanting more 5e for their 5e. I wouldn't put it on my recommendations list, and would recommend that anyone interested in it buys it on sale.
Posted by Dan at 9:17 PM