The Book of the Night


The method and structure I'm using here are stolen wholesale from reddit user fxktn and ancepsinfans.

Furt helped me with the translations.

The Book of the Night


"Through my reason I know that I am mad, and all the world mad with me."


So begins the Kitab al-Layl of Abd-al-Hazra (d. 738), the seminal work of Umayyad occultism. The work of the self-described "mad Arab" has been subject to over a millennium of religious and secular censure, shoddy translation, misinformation, additions and moral panics.

While the Kitab al-Layl contains notable treatises on alchemy, medicine, and astronomy, what has remained the work's defining characteristic are the sections named as "Conversations with a Learned Elder", in which al-Hazra engages in a lengthy dialogue with an unnamed individual regarding the nature of the universe and the powers that sustain it.

In the Conversations, al-Hazra divides the universe into three primary aspects: the purely physical, the purely spiritual, and the transitory territory between. This third category he posits as the most potent, consisting of the fundamental aspects and powers that govern the other two.

The al-Hazran universe is modeled as a dodecohedron. Each face of the polygon represents a different power, and maps to those powers which are considered opposites, and those which are more liable to overlap. The powers are further divided into "hot/feminine" and "cold/masculine" groupings, though al-Hazra notes that this is his own invention and the Learned Elder is dismissive of this structure.

al-Hazran admits that other powers might indeed exist outside of his schema and that none of the powers he details are sharply separated from the others, but thus far his design remains the most popular structure for organizing the Outer Powers.

Notable translations and editions of the Kitab al-Layl are as follows: 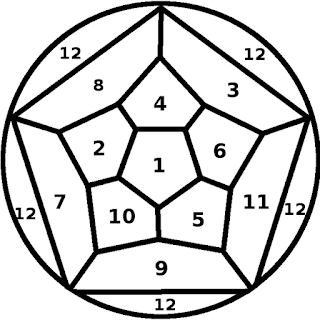 The names provided are a mix of Arabic and Greek, accompanied by a common English name. While the names used in the 1938 Miskatonic edition are widespread in common usage, they are fabrications of the translator and have no basis in any language.

That which is the untameable chaos from which the cosmos is formed and to which it is fed in destructive return.

It has only ever manifested in the form of a roiling cloud of superheated hydrogen, fusing into heavier elements and shrouded in mantles of dark matter. Sites where it has manifested remain permanently inculcated by radiation and prone to gravitational abnormality.

That which is the impassive, unchanging imposition of order. That which maintains the passage of days and the circuits of the heavenly bodies in their course.

That which is rot, sickness, corruption, the making-wrong of things, the fundamentally unclean and irredeemable.

That which destroys utterly, which sterilizes, which excises, which ends and leaves nothing behind. The severing of continuity.

That which weaves and spins, drawing all things together and moving without seeing. The loom of causality.

10. Khthónios (The Dark Beneath the Earth)

That which is sleeping, stagnant, slothful. The warm stillness of the primordial dark. Unmoving in its passivity, slinking down into dreamless, thoughtless night.

That which is hunger, loss, lack, emptiness, abandoned. The bitter edge, the gnawing cold. The curse of want, the wasting away.

That which brings suffering, the knife whose point is cruelty. That which is agonies, ecstasies, self-destruction.

That which is the threat to come. Far away now it sleeps and dreams, but it will come in time and reshape the world. A thing so great and vast that to comprehend even its pieces is to know it cannot be fought nor diverted.

That which is disruption and lies. The dancer and the piper, the masked stranger. The face of chaos. The hand that guides towards undoing.
It ought to be noted that this power is named in Coptic, the only such use of the language in the book.

The distant throne which troubles the mind and disrupts its workings. That which corrupts word and thought and draws all things under its mantle until neither word nor thought may escape.