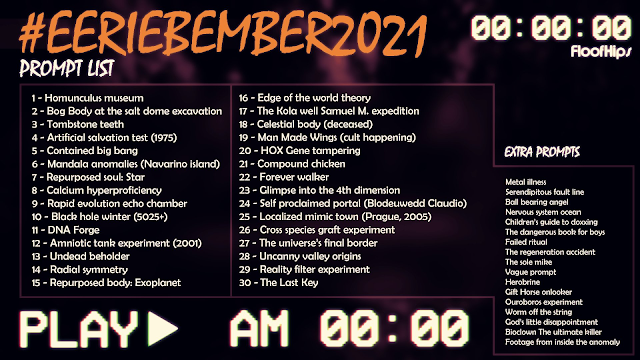 As a bit of a warmup routine while I work on other posts, I'm going through @floofhips' Eerievember prompts in the style of my Lighthouse entries, since I vibe with this style of weird.

The National Homunculi Museum in Philadelphia holds the largest collection of artificial humans in the world (especially now, after the destruction of the Frankfurt Alchemical Academy in 1940). Over 1800 specimens representing over 300 different construction templates are on display, as well as extensive collections of alchemical tools and accoutrements and a reference library open to the public.

The museum has courted controversy in recent years by displaying the bodies of sapient homunculi acquired prior to the Liberation (and thus with no recorded consent-to-display). The 25 specimens in question were eventually turned over to the AUAP (American Union of Alchemical Peoples) and cannibalized according to custom, with the bones interred at the Tower of Azoth Imperishable war memorial.

Four preserved bodies were recovered during excavation of the salt dome: two adult men, one adult woman, and a female child, all dated to about 5500 BCE / 4500 HC. Given the condition of the bodies and the external and internal injuries present across all four, it's believed that the surface they had been walking on collapsed, crushing them after they fell. Clothing and items well-preserved. Estimated ages 40, 30, 25, 8. Genetic testing indicates that the men were brothers, and the child the daughter of the woman and Man #2. Tiya, a movie adaptation, reviewed well at Sundance Film Festival earlier this year.

The practice of seeding fresh graves with milk teeth (typically from a grandchild or godchild) has emerged as a means of warding off all manner of woes - typically to keep blightcrows away from the body and to safeguard new spirits from prowling anthropodaemons.

Verdigrising encephalitis is a fatal paralogical prion disease where the subject's brain is swiftly transitioned into copper. The end results are, despite attempts by world governments to crack down on the trade, sought after by certain wealthy individuals for their supposed occult benefits.

The cult's efforts had been in vain from the beginning, as a major earthquake some 40 years prior (and smaller quakes in the decades since) had re-aligned the leylines that the ritual was dependent upon. The natural course of plate tectonics has sealed away dread Yhenraghul for the long term, it seems.

A shlock-horror adventure game developed in 1994 but never released to the public. None of the original code remains, and bootleg copies (including the ROM freely available online that serves as the standard) are of poor quality. Rumors of hidden horrific or salacious content or conspiracies about the disbandment of the dev team circulated on Usenet for a year or two before the game was forgotten. Its modern resurgence is nearly entirely thanks to the Youtube essay channel JunkClosetGames, who featured it in their Halloween 2020 special.